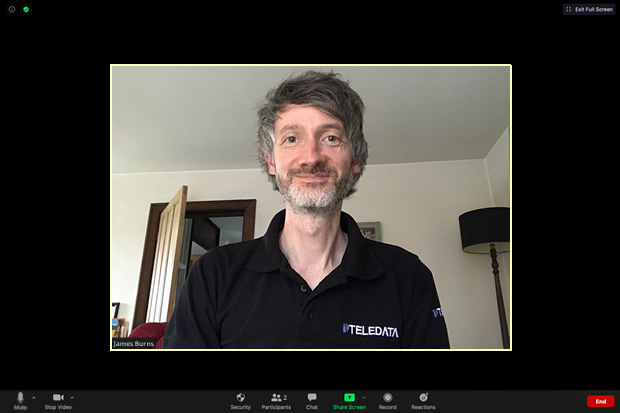 Every month, we catch up with a different member of the TeleData Team to find out their thoughts on all things tech.

This month we caught up with James in marketing, who can't live without his phone, even though he'd ditch phones into Room 101 if he could!

What was the first job role to land you on your tech career ladder?
I started off with some work experience for the fledgling company that would become 1st Easy (years later to be acquired by TeleData!). It was great - I was taught the basics of the Internet, how websites worked and was even allowed to borrow a 56K modem to try and get my PC online at home! I started picking up some technical skills (enough to build websites and provide basic technical support to our hosting customers) and eventually I was taken on as a full time member of staff.

Describe your typical day at TeleData in no more than 20 words.
It's always "good busy". Lots of new things to promote and talk about, working with a brilliant and dedicated team.

Best thing about working in tech?
It's great to be involved with new ways of doing things - there's always something new to learn and share, which is an exciting place to be.

Worst thing about working in tech?
I don't think there are many real negatives at all really. If I was pushed, it would be one that a few people might identify with: being the default family tech support person! Not that I mind - I like helping, and it saves a few computers from being thrown out of the window!

Which one piece of technology could you not live without?
I think it would be my phone - it does the really important bits, like keeping in touch with family, friends (and work colleagues!) - and the not so important, but unbelievably useful things... Before Google Maps, how did I manage to get to exact street addresses on the other side of the country with an atlas and few scribbled notes on the passenger seat next to me?! Shopping lists, remote heating control so it's warm when I get home, a decent (video) camera in my pocket, music, hands free payment - the list goes on.

Which one piece of technology would you ditch into room 101?
To contradict myself entirely, sometimes I think phones! I know I'm not alone in thinking that it's so easy to spend too much time on a phone. I try to be really conscious of breaking the habit of doing a bit of browsing whenever there's a pause in the day. No doubt they're fantastic, helpful parts of our lives, but there are so many important things that are far more worthy of our attention.

Best tech innovation of the last 12 months?
Lots to choose from, but I think it's pretty impressive being able to land a reusable rocket on a pad in the ocean, after sending off a crew to the International Space Station. I'm still suspicious that the touchdown wasn't shown on the videos though...!

Who’s your tech hero?
Whoever invents time travel, or some kind of ad blocker for TVs that would mean I'd never have to see another online betting or pension plan ad again :)

Apple or Android?
For phones and computers, it's Apple so far for me. I think in terms of user experience - particularly with apps and the operating system - less is sometimes more both in terms of control and choice. Whenever I end up being asked to try and sort out an Android phone there just seems to be so many different ways to skin a cat and who knows which one will work!? Throw in all the different versions and custom OS flavours, and it soon gets complicated.

What was your first ever games console, and your favourite game?
My first computer was the family Acorn Electron (favourite game was probably The Last Ninja), but my first console was a Sega Megadrive that I saved up for with my car washing round. My favourite game on that was EA Hockey (and NHL 94).